I think today counts as one of the most spectacular, and potentially dangerous journeys we have ever done. Apart from the possibility of rockfall and unstable road edges above plunging valley sides, there was the added risk of being blown up.
We awoke to a hard frost, the valley covered in a film of white. After an early breakfast we hit the road at 8.00 and climbed out of the valley. It was a glorious day, but still quite cold. We wound around the valley sides, the road good in places, but often nothing more than packed earth. The views were breathtaking and Mr Numgay was continually pulling over to let us take pictures. He has truly got my measure and has a good eye for a photo opportunity. 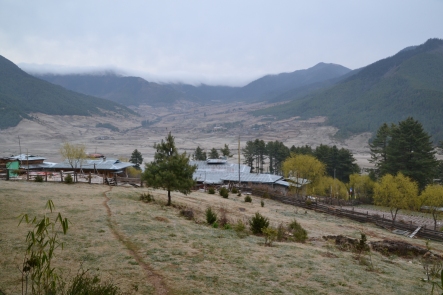 Around 10.00 we stopped at a Nepalese stupa, identified by the eyes painted on the top. It was beautiful as a river gurgled past it and children played on 5he grassy area in front of it. It was quite warm by now and it was good to stretch our legs.

We climbed steadily heading towards Trongsa and lunch. At about 12.30 we stopped on a bend in the road with an incredible view over Trongsa and its dzong. Below us an HEP plant was being built with Indian money. Bhutan is self-sufficient in HEP so is making money exporting electricity to India. Sunam pointed out the restaurant we would be stopping at for lunch. I wasn’t particularly hungry, but I needn’t have worried, it took another hour to reach the restaurant. We went down one valley side, crossed the river and then back up the other. By the time we got there we were both starving. 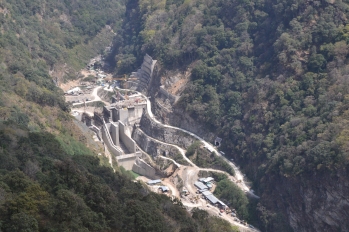 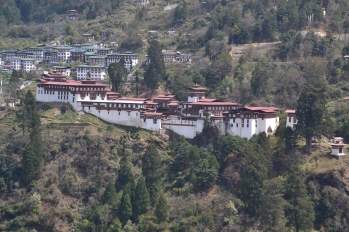 It was a very good lunch – buffet style as always. We enjoyed ‘nackey datsa’ which was edible fern fronds in a cheese sauce with chillies and was very hot. The restaurant had a good view of the dzong and we were entertained as a group of staff rehung the prayer flags around the garden in front of us. It seemed like organised chaos and at one point one man nearly fell off a ladder when the guttering he had propped it on broke off!

After lunch, Sunam asked if we would like to walk to the dzong and of course we did. It was sunny and warm and it was good to be walking. We passed through a local vegetable market, built by the government and tried to identify various veg. and fruit.

Just below the dzong there was an archery match taking place, this time using compound bows rather than the traditional archery ones. The distance over which they shoot is 176 metres! After watching for a bit we walked across a beautiful bridge and into the dzong grounds. The dzong was built in 1644 on a site that was already considered holy since 1541. However an earthquake in 1897 severely damaged it and it was repaired by Bhutan’s first king. The royal family are hereditary governors (penlops) of this area.

The dzong is very beautiful with the traditional regional administrative offices in one part and the monastery in the other. The decoration is stunning as you walk through two courtyards before reaching the temple. Inside the temple it is very dark but you can still see the beautiful paintings and the statues of the past, present and future buddhas. A monk shuffled past the altar, with dusters under his feet – a clever way to clean the floor! Corporal punishment still exists in monasteries, although banned in schools, and the monks were chasing each other with a broad leather strap used to enforce discipline.

The setting of Trongsa is very attractive at the head of a valley feeding the main one. We climbed up steadily and the road deteriorated as we went. No need of a massage this evening, we got one for free over the next 4 hours. The problem is that the government has decided to make the road two lanes throughout, with the help of Japanese money. So they have mostly taken up the old road, and covered it with earth and stone. Then frost, snow and monsoon rain has got to work on it. The result is enormous potholes. Where they are working the road is often down to one lane and can be a quagmire. In places they are having to blast away rock to create a wide enough road.

We slowed down at one point because a lorry was half way across the road. Mr Numgay eased the car between the lorry and the road edge. As he started to accelerate a man came running and shouting after us. I told Mr Numgay and he slowed down. The man drew level and shouted ‘blasting’. Mr Numgay lowered the window and the man explained they were about to blast away some rocks. We retreated and a few minutes later there was a loud bang. Of course we had to wait for about 15 more minutes while they cleared the road. The second time this happened we waited as snow fluttered down out of a foggy sky.

Mr Numgay’s driving was superb and he seemed inexhaustible. We were tired just watching him from the comparative comfort of the back seat! We gave him a round of applause we when got to our lovely hotel. Now we are sitting by our log stove, stuffed with some delicious food ( more nackey) and wondering what tomorrow will bring. I gather we are staying fairly local thank goodness. We have 3 nights here and then……..yes, you guessed it, we make the same journey back. I can’t wait!!