A ‘ripping day’ today look around the sights of Kolkata. Breakfast here is a lavish affair, with so much choice it takes at least 15 minutes to work out what is on offer and what it is you fancy. Even then I missed the dhosas on offer, but there is always tomorrow!

Our excellent guide met us in the foyer at 9.00 and we set off on foot for a wander around the old colonial quarter of the city, taking in the old Government House built in the mid18th century and now the residency of the state governor; the High Court built to look like the Cloth Hall in Ypres; St John’s Church, which we visited before and the GPO. We then entered the BBD Bagh (garden) which has a large tank (lake) in the centre of it. While in the latter a flash of turquoise announced a kingfisher was present and a heron wandered idly along the shoreline. 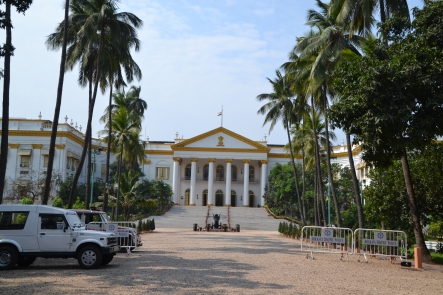 All around us as we walked, life on the street went on uninterrupted by the sight of 10 fascinated foreigners.

We were then met by a mini-coach which took us to Mother Theresa’s house still the offices of the Missionaries of Charity. We visited her tomb, a small museum devoted to her life and her simple room with a bed a desk and a chair. I was more moved than I expected to be, for clearly the work she did amongst the poorest in the city was remarkable. Some of her sayings about religion and community were also interesting and inspiring to read.

We were driven down to the flower market below the Howrah Bridge. We enjoyed again the colour and bustle of this market and the incredible structure of the bridge towering above it. The scent of flowers was regularly interrupted by the scent of sewage and it soon became obvious why. A blocked drain was being cleared by hand and the effluent carried away in baskets on the workers’ heads.

We got back on the coach and this time we drove over the Howrah Bridge, past the main railway station with 22 platforms and then back over the new bridge and past the Victoria Memorial to our lunch place. This was a rather dark, basement restaurant called ‘Flavours of India’ that served only Chinese food – don’t ask. It all took a long time to come, but once in front of us it was delicious. Frankly we were glad to rest awhile in an air-conditioned room after the heat outside.

After lunch it was a short drive to the Victoria Memorial, which was complete in 1921 as a tribute to her maj.. It is a domed classical structure of enormous size. We approached from the front, but as you can see were advised to approach from the rear! It is clearly the place to be on a Sunday as it was packed with Indians, all coming to view their national heritage. Within the space of 5 minutes I had to pose for 2 selfies! We waited for our guide to organise our entry and I went to take a picture from a vantage point in the entrance, down into the gardens. Next thing whistles are being blown and guards are shouting. Apparently I had committed some sin by walking onto this area, although there was no sign nor indication that this was ‘verboten’. Anyway we were let in and wandered first into the central dome with its cases of old weapons and a central statue of Victoria as a young queen. We climbed up onto the gallery which runs around the dome and had a closer look at the paintings on the dome of Victoria’s life. A particularly vicious sounding female guard shouted and blew her whistle at people up there, although what rules had been infringed it was hard to tell.

Back down, we went around an exhibition of Kolkata’s history which was fascinating but difficult to see because of the crowds. There was really too much information as well, so we had to gloss over much of it. Lastly we went into an art gallery with an exhibition of pictures from Kolkata and other areas of India by artists, (mainly British) who had worked in Kolkata. It has to be said there was not much of quality there.

We came out into the relative cool of the gardens and wandered down to the equestrian statue of Edward the Seventh. Some crows were building a nest in his bridle. I sat on a bench to watch them, and as I did so I heard a distinct ripping sound. There was no doubt, my old linen trousers had split around the crotch and backside. I sought solace from my dear lady wife you just collapsed in helpless giggles. By lowering the strap on my camera bag and holding it behind me, I managed to get to the coach with a degree of dignity. However as I climbed into it something must have shown as two young Indians were laughing and pointing as I took my seat. Thank goodness they didn’t take pictures.

Our final stop was St Paul’s Cathedral built in 1847. It is unusual inside having a large nave with gents’ seating to the left and ladies to the right. There are some interesting epitaphs on the walls, but unfortunately photography is forbidden.

So now we are awaiting dinner and my trousers are in the bin. I am trying to put it all behind me, but I have a sneaking feeling that my dearest and my friends may not let me.