A travelling day today. We left at about 9.00, managing to visit an ATM before we departed. We travelled north towards Silghat on the Brahmaputra, stopping only once for a toilet and coffee break. The toilets were fine and they were where the coffee belonged. It must be just about the worst cup of coffee I have ever drunk. Nicecafe it was called and it did not even begin to live up to its name. The water had been shown a bean, had rejected it on the grounds of good taste but had strangely accepted a dollop of sweetened UHT milk. Still it was all we were going to get for a while.

We arrived at our ship, the M.V. Mahabaahu, in time for lunch. What an wonderful vessel she is and what a delightful crew she had! This is luxury on a scale we have rarely met. The ship is run by a strict but delightful lady who keeps all in good order including her passengers- think of a Norland Nanny! We were greeted with warm towels and a refreshing lemon, pineapple and ginger drink. We changed into slippers and then shown to our rooms, our cases arriving shortly after. The cabin is very well appointed with an excellent bathroom. All is shipshape and Bristol fashion. The food is delicious and we expect to put on pounds over the next few days!

After lunch we had an unexpected walk when some elephants were spotted on the right bank. We were put into a cutter and taken to an island in the river from whence we walked to the far side and a better view of the elephants. An osprey also made a brief appearance. We walked back and brought back to the boat when we were told we had 15 minutes before we visited the local jute mill.

Quickly we sorted ourselves out and then disembarked, walked a few yards and into the mill. This is a local co-operative and processes locally grown nutty to make ‘gunny’ or hessian sacks. There are 1200 workers (all men as far as we could see) and they are paid 250rupees a day – about £2.50. We were provided with earplugs and a face mask and believe me we needed both. The factory was unbelievably noisy and the air was full of jute fibres. 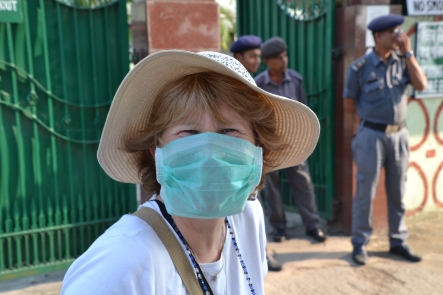 The jute is first put into water for 15 day’s to soften it. Then it is brought in hanks to the factory. It then goes through a number of processes that break the fibres down before they are spun into jute yarn. Then automated looms weave it into cloth of differing widths. This is then cut and sewn into sacks. The factory reminded me of a C19th textile mill in Yorkshire. It was absolutely fascinating.

From there we were loaded into cars and driven a short distance to a tea plantation. As the sun sunk in the sky we walked up through the tea gardens. It was lovely, the silence only punctuated by the tractors that brought the female pickers back from their work. We ended up on the edge of a small village where children were playing a scratch game of football. I wandered into the village and took some pictures. As I rejoined the group an auto arrived packed with young people in traditional dress. 14 of them got out of the one auto – I’ve no idea how they all fitted in there unless it was like the Tardus. They then performed a typical Assam dance. Of course they insisted that we had a go – luckily they only picked on the women!

Back at the ship we begged for a break in order to shower and generally freshen up before dinner. This was granted with a degree of misgiving by the boss. We were very grateful for a shower and a G & T before dinner. Wine was served with the meal which was delicious. As soon as it was finished we were herded into the lounge for a lecture by our resident naturalist on the fauna found in the Kaziranga National Park. We struggled to stay awake as interesting as it was. Then we had the basic safety announcements and finally we allowed to our beds with a strict admonition to be sure to be in the dining room by 3.30 a.m. ready for our safari.

It’s a hard life – one enjoyable experience after another. However it is tempered by the prospect of less than 6 hours sleep tonight, so it isn’t all bunting and frolics!