A leisurely start to the morning was very welcome. We had decided that we would go to the big Saturday market on the hillside on the edge of Ngara, so set off just after 11.00. It is a lovely walk down into the valley bottom and then up the other side. The river is full of beautiful purple water lilies and several children wanted s to take their pictures. We climbed up the hill and followed the new road to the main Ngara road, turning right to go to the bank as Tim and Esther wanted some money. At the bank we met Christela and her sister. We also asked about the lost keys, but none had been handed in. Then we were approached by a young man on a bike – Wilbert (Wilbard – not too sure to be honest!) from NAPS who insisted on accompanying us to the market.

We were glad of his company as he could make sure that we weren’t paying ‘muzungu’ prices. We entered at the top of the market and wandered down to where the kangas and kitenge are sold. We looked around but nothing grabbed Christine’s attention, so we went down into the fruit and veg. Area, Wilbert explaining what various vegetables were. We ended up buying some lemons and some unusual looking avocados. 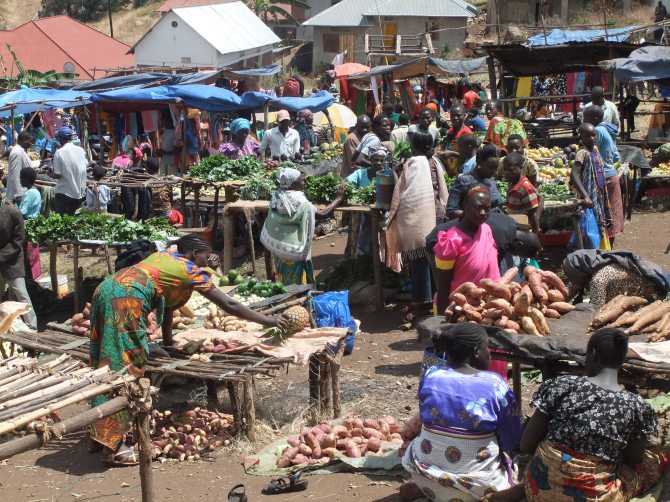 Christine eventually settled on a couple of kitenge at a suitable price and after an hour or so, the heat and exertion started to get to us so we beat a retreat to the petrol station for some cold drinks and a Mars bar. A poor woman, who clearly had mental health issues, followed us from the market and turned up in the petrol station shop. She wanted money and proceeded to make a nuisance of herself as we bought our treats. Wilbert tried to deal with her, but as we headed back to the road she decided that she was on a hiding to nothing and went back to the market.

We took the earth road down the hillside and Wilbert eventually left us as we rejoined the tarmac road. Apparently he lives nearby in rented accommodation. I have feeling we haven’t seen the last of him as he was dropping hints about his need for sponsorship for his M.A.! We walked down into the valley bottom and then up the other side, sweating profusely in the heat, but grateful for the extra energy the Mars bar had given us. Half way up we met the headmaster of the ‘Good Shepherd’ coming down on his motorbike. He was keen for a chat and has promised to have another look for the lost keys. Then we bumped into Naomi on her way downhill and several of our students. It seemed that everyone was heading for Ngara! As we reached the bottom road there was a great deal of honking and a cavalcade of cars approached all decked out in ribbons. It was the wedding party from the cathedral with the bride and groom standing up through the sunroof of the third or fourth car waving at all and sundry and the choir packed into a cattle truck bringing up the rear. It was quite a sight. As we approached home we realised that the Mothers’ Union building was where the reception was being held. The noise was deafening as several speakers inside were clearly turned up to 11 or beyond. We had not been invited to the wedding (why should we be?) but the wedding had definitely come to us.

At about 6.00 p.m. Tim joked that they would almost certainly stop celebrating about 8.00 so that the children could go home to bed. Weirdly at 8.00 p.m. everything went quiet save for a few cars heading off and the sound of voices as people headed (with their children presumably) homewards. The rest was silence!

The exercise meant that I had a really good night’s sleep and woke refreshed if rather surprised as the alarm went off at 5.45. Bleary eyed we got ourselves together. Absalom arrived at 6.55 and we headed off to Ngara and then westwards to Marabwe. The journey was along a ridge with spectacular views either side. The road was relatively quiet although here and here family groups in their Sunday best were heading for church. We arrived more or less at 7.30 and were greeted by a relieved Pastor Samson who we had last met at KTCT in 2013. Tim robed up and we were taken to our seats behind the altar. The clergy processed in and the service got underway. A female choir sung beautifully with just a drum accompaniment; indeed there was no electronic music in the church which was a blessed relief. Tim preached an excellent sermon on faith and religion based around Matthew6 1-16 which Absalom translated.

Then, after the announcements, I was invited to say something, which I duly did. Thankfully it seemed to go down well and we were then ushered out to enjoy breakfast at Pastor Samson’s house – tea (or chai) and bread. We went for a short walk around the church and school before witnessing the end of the service as everyone came out into the open area at the west end of the church.

A quick turn around and we were back inside for the second service, billed as a ten o’clock but now running a little late. We found it hard to keep awake, it has to be said, even though Tim once again preached his excellent sermon. This time we stayed on for communion and the auction of gifts at the end of the service. Tim had the idea that we would try to out-bid each other for 3 eggs and hopefully amuse the locals. We checked with Absalom that this would not be seen as us showing off our wealth and with his blessing we did just that with me pantomiming outrage at every new ridiculous bid from Tim until I got three eggs for Tsh10,000 (just over £3). Some people found that amusing, but I have to say that I’ve played to easier audiences. We filed out and shook everyone’s hands before we broke up to head for the pastor’s house again for lunch.

It was quite a spread with a massive bowl of rice, an equally large bowl of mtoke (which was very tasty), beans and some beef for the meat eaters. However we Brits. are a disappointment to the locals when it comes to eating as we can never match their prodigious appetites. We did our best but looked on in admiration at their bowls piled high not once but often twice! As Absalom pointed out you need all those carbs. if you are spending the afternoon on your shamba.

We headed back to Murgwanza, the air blowing into the car redolent with the scent of coffee in flower. This is a major coffee growing area as Ngara coffee is making a name for itself. A large sack of dried coffee cherries sat in the vestry at Mahabwe church. They did not seem of the highest quality, but who knows. This is a fairly new and expanding enterprise and in time ………

As we turned down the road from Ngara to Murgwanza there was a very ominous hissing sound and the rear nearside tyre of Absalom’s car was flat. We pulled over and began the process of changing the wheel. This proved more difficult than anticipated. The jack was very stiff and the suspension very slack, so that every turn of the jack meant the suspension sagged a little more and the tyre remained firmly on the ground. Absalom, Tim and I took it in turns to work the jack which was hard work in the heat. Eventually we worked at the ground under the tyre trying to excavate a hole under it to be able to slip it off and put the new one on. After about 30 minutes we had succeeded and we were on our way.

The afternoon was spent drinking tea, reading and sleeping. A short walk gave us stunning views of the setting sun and then it was time for dinner. Teaching again tomorrow, so not a late night. I wonder how much the students will have forgotten in two days?!