A lovely evening, sitting out in the garden enjoying s Chittagong peg of excellent local gin and tonic. The night air was cool, but a fire burned in an open brazier / fire pit and kept us warm. Dinner was a delicious tali followed by a cold rice pudding and a jalab.

A good night’s sleep followed and we arose at 6.30 for a good breakfast at 7.30. I had muesli, a cheese and chilli omelette and some toast. The weight is piling on! Then we drove to the Mehrangarh Fort which is situated on a red sandstone outcrop above the city. It is spectacular and I was itching to explore. Our guide seemed to take an eternity to get the tickets, but then we were off. This time Christine came as well. There is a lift to the top so the 2 claustrophobics went first with Christine as carer. It wasn’t too bad, but it was good to emerge blinking in the light t the top. The fort dates from around 1459 with more recent bits added and is quite stunning. Inside its boundaries there are several palaces known for their intricate carvings and expansive courtyards. We wandered through them taking pictures and admiring the incredible craftsmanship. We came out into a large courtyard with trees. It was very pleasant walking up through it and towards a Hindu temple at the far end. Here a priest was accepting offerings and putting bindis on foreheads. Worshippers were ringing bells and burning incense. The temple dates from about 1460.

We walked back in the warm sunshine and then back into the building to look at the displays of palanquins, howdahs, and armoury, before making our way down the steep road out of the fort,passing between the thick walls and numerous gates. We arrived in time at the place where we were meeting the others, but there was no sign of them. We went to sit in the sun and I went out to the car park, but still no sign. I wasn’t worried as I doubt if Mark would leave us, but I was puzzled. I went back up into the fort – still no sign. Eventually, half an hour later, they materialised from the lift. It seems that some of the halt and lame had taken a bit longer to go around the rooms – fair enough. 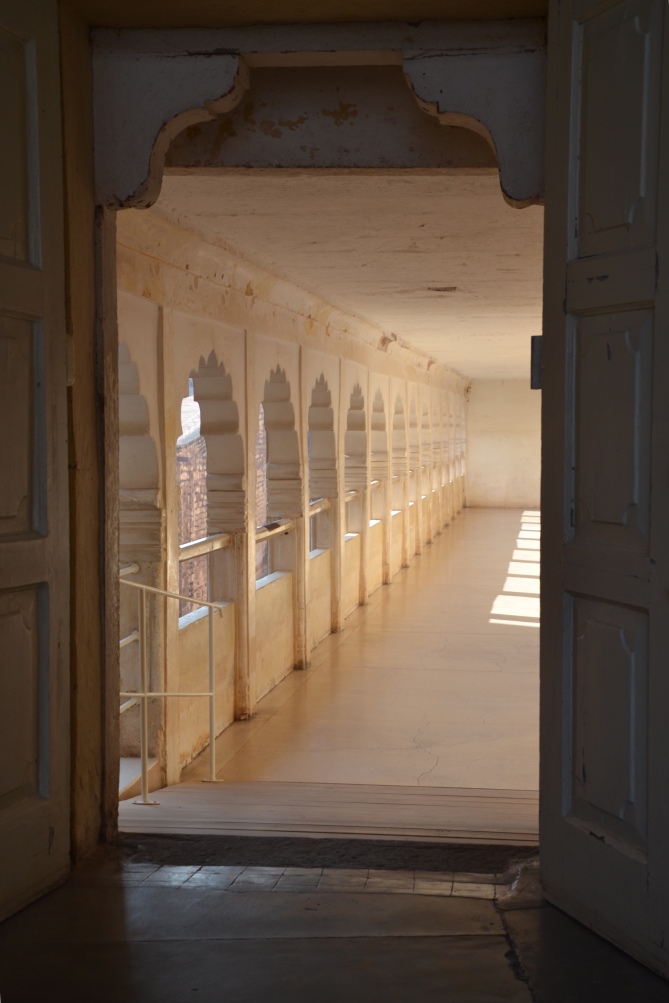 Back in the car park we got onto tuk-tuks and headed into the old blue city. I have observed before that there is something especially frightening about being driven by someone who has a firm belief in reincarnation and that fear does not dim with time. We careered down very narrow streets praying that thy were one way, but of course they weren’t. Passengers on motorbikes or in other tuk-tuks all but joined us in ours as we squeezed between them and shopfronts/walls and other impenetrable street furniture. At last we stopped outside a temple (and frankly I was prepared to make an offering to Shiva in thanks for sparing our lives)and we walked down into the textile part of the town and into a shop. SNAP. The trap shut and for the next two hours we saw some fabulous fabrics, but received unremitting sales patter. It was entertaining, but I confess I got bored and headed out to wander the back ways of the town. I encountered an elephant amongst other things and generally enjoyed dicing with death as motorbikes, tuk-tuks and other vehicles tried to take over my piece of road. The noise, colour, and smell are a heady mix and I just love it!

Christine ended up buying three beautiful pieces of cloth for what seemed a very good price and , no doubt, our guide got his commission.

Back in the tuk-tuks, we drove relentlessly towards Toorji’s step well built in the 1740s by the consort of the local maharaja so that the local women did not have so far to travel to get water. Recently it has been very well restored. 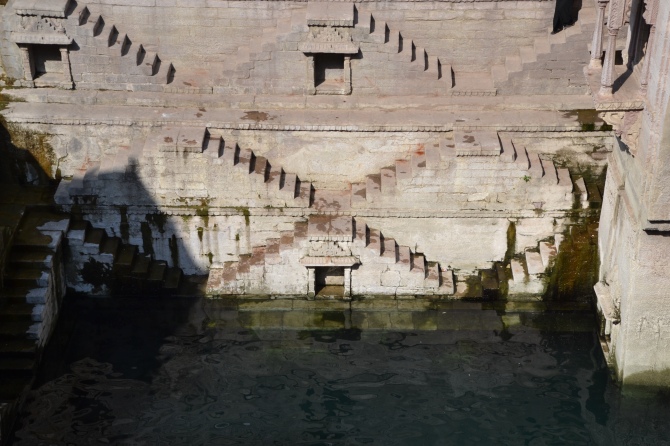 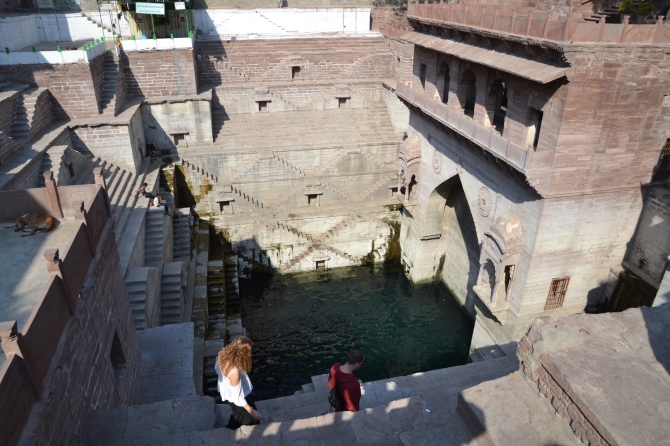 More tuk-tuk mayhem and we regained the calmer atmosphere of the coach which took us to a late lunch in an oasis of calm called the Kasa Bagh which was like a minor palace. The food was delicious and very reasonably priced, considering the grandeur of our location.

From there we drove to the Umaid Bhagwan Palace Museum, which is a fairly recently built palace. It is now part museum and part hotel. And to be honest wasn’t that interesting, but had fantastic views over the surrounding area and some quite interesting clocks and other domestic bric-à-brac from the last century.

We were glad to arrive back at our fabulous hotel and have shower and relax before joining the talented lady of the house in the garden as night fell. She was charming and obviously substantially wealthy as her husband is a talented horseman and plays polo. Other joined us and we enjoyed some G&Ts before going in to dinner. This time the chef wanted to give us his continental cooking. Frankly that man could have given us his Moon and minor planets cooking and I’d have eaten it and asked for more. His mushroom soup was delicious and the cheese steak (yes, steak) in a rich tomato sauce was wonderful. His chocolate brownie was darned good and all. Now we only have breakfast tomorrow to enjoy his amazing cooking! We must come back!