It had to be done. Well I suppose it did. Can a Christian come to Jerusalem without viewing Christ’s supposed tomb? I think not. But neither it seems can most other religions, agnostics, atheists etc. which is why you have to get up early. 6.30 in our case and arriving at The Church of the Holy Sepulchre at about 7.30. Dani and Mike had gone to a 6.30 mass and it was pure luck that we joined the queue to get to the tomb directly behind them. The queue was not moving. We stood an chatted. Still no movement. At about 7.45 some thing seemed to be going on up ahead and sure enough the queue moved. Slowly we inched forward until at about 8.20 we got to view the marble slab on which he supposedly lay in the tomb. From there it is but a short walk and a short queue to view the supposed limestone mound which was Golgotha. Of course it didn’t have to be that high as being on a cross made you all to visible ‘pour encourage les autres’. There is a gilded hole above the stone which I assumed was to put your arm in to feel the stone. I was somewhat surprised to find it full of litter. Then it dawned on me that these were bank notes. How better to commemorate the death of our Saviour than in dollar bills or shekels? 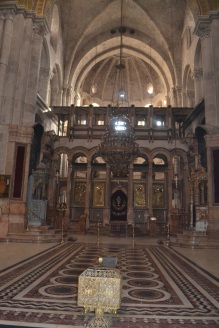 We did not linger and headed back through empty streets to our hotel and breakfast. At the Damascus Gate Christine noticed a woman n a red coat and bobble hat standing absolutely still in front of it. Christine had noticed that she had been there at 7.15 when we had passed through. Very odd.

We met Dani and Mike for breakfast and then set off to the. Mount of Olives. We headed back to the Damascus Gate. I was now 10.00 but the girl was still in the same pplace. I asked her what she was doing and apparently it was some form of independent film project. Her cameraman was on the steps to her left.

We walked down the Via Dolorosa looking for Lion Gate and St Anne’s Church. I mistook one of s number of arches for the fate and then got us completely lost. Eventually we found St Anne ‘s and it was heaving! The church is Romanesque and beautiful in its simplicity. It has a remarkable acoustic and an American Choir was trying it out with Amazing Grace. If sound quite impressive, in spite of their pronounciation. Once they had left we had the church to ourselves so I gave a quick solo of ‘Lord we beseech you.’, and yes the acoustic is quite remarkable:even  my voice sounded passable! 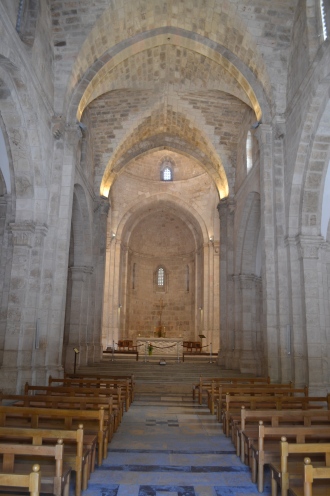 It is hard to work out what is what outside the church so many generations gave built over and around the pools. Add to this the vast numbers of awed Americans and clamorous Chinese and the whole experience becomes hard to enjoy. However they do stay with their leaders, few wander from the throng, so we found a walkway around the other side of the site and enjoyed some relative peace. The pools, north and south, I was particularly keen to see having written about them in both of my religious monologues, Febronia and Mary, particularly the latter. I was not disappointed. With the help of a simple guide and some plaques we managed to piece together what would have been there in the time of Christ. I imagined Mary in one of the rather posh rooms situated between the pools, favouring the northern one where the water was cleaner and the common people did not enter.

Outside the Lion Gate we entered a Moslem cemetery which gave us good views across the Kidron Valley towards the massive Jewish cemetery on the Mount of Olives. We crossed the Kidron or Valley of Jehoshaphat, dodging the multitude of tourist buses and taxis and eschewing the Basilica of the Agony, we found a quiet road up the edge of the Jewish cemetery to a viewpoint at the top of the Mount. The sun was beating down and it was quite a climb, but well worth it. As we passed the Jewish cemetery I pointed out the stones piled on many of the graves. “Why do they do that?” Christine asked. I reminded her that at our Family Remembrance Service only a couple of weeks ago I had based the service on this Jewish ritual and we had all laid stones around the font. It clearly had made quite an impact! 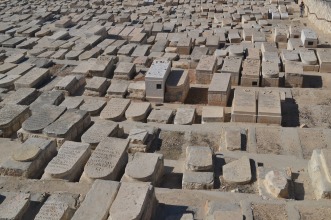 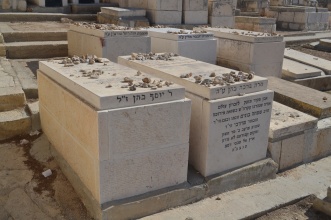 We treated ourselves to a cereal bar as we looked across to the walled city and then after using the impeccable toilets we headed further up to the Mosque of the Ascension. Within its grounds is a beautiful little chapel dating from about 1200. Inside is a piece of stone with a supposed footprint our Lord left behind as a left for heaven. If so, he had surprisingly large feet. 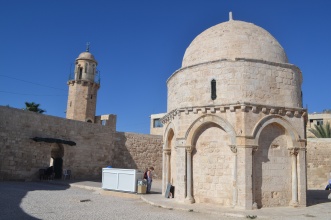 We descended via a much busier road and enjoyed an overpriced, but delicious pomegranate juice at a small cafe at the bottom. Back through the Lion Gate we navigated our way across the old city to the Jaffa Gate. The Via Dolorosa was blocked in places by thrombosises of tourists, clustered around their guides, drinking in every word and quite oblivious of everyone else. Eventually we struck off away from the crowds, but met them again as we approached the Jaffa Gate.

Our aim was to walk on the walls which run between Jaffa Gate and Dung Gate. It cost 18 shekels each, but I produced my senior railcard and got in for 8 as a senior citizen! The walk was lovely but hard work. Every tower had massive stone steps up and down and by now our legs were feeling like jelly. At Dung Gate we set off in pursuit of refreshment, but decided instead to buy some cakes and head back to the hotel for afternoon tea on our terrace. We bought some delicious cakes from a stall near the Damascus Gate and as we passed through there was the girl, standing in the same spot. Christine asked if she had had a break and was released to hear that she had. She was still being filmed, so I presume we are now part of an art installation to be screened in the future!

Tomorrow we leave Jerusalem for the Sea of Galilee and hopefully a less frenetic and cheaper few days.