A mixed day in many respects. We left the hotel at about 9.30 in a taxi bound for Tel Aviv airport to pick up our hire car. At the airport I did discovered I had left my phone and our guide book in the taxi. By sheer luck, I had taken the driver’s card and phone number, so was able to phone him and ask him to come back with it. Expensive, but a relief!

Then we set off for Caeserea. The car is a Toyota Aventis and very nice to drive, as well as comfortable inside. We reached Caeserea at about 1.30 and paid our entrance fee to the enormous archaeological park. Lunch was our first requirement and we mined our store of shekels for a couple of bagels. Then Christine and I walked through the remains of this fine Roman city, past large warehouses, bath houses, palaces and offices.

Along the seafront was a hippodrome and much of the tiered seating still exists. Christine could not resist playing Ben Hur on a sculpture of a chariot. 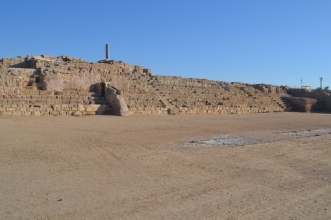 At the far end, to the south is an enormous amphitheatre which sat 4,000 people and which has been restored and is used today. 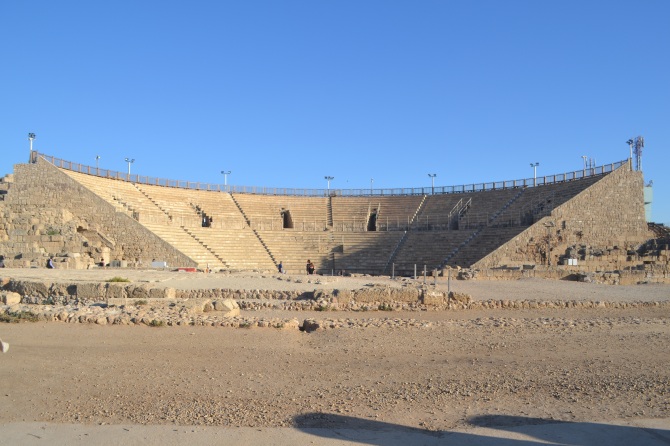 The Med. looked very inviting, but we resisted a dip. However we could not resist some excellent Italian ice cream, even though our shekels were rapidly decreasing. Israel was always an expensive country but thanks to Boris Johnson and his lying bunch of Brexitiers, it is even more so now. I hope all those who voted ‘yes’ will be happy to pay more for everything when they go abroad for their holidays. Oh, of course, they don’t like abroad do they, or anyone from it. They’ll be quite happy to stay in little England won’t they, building sea defences to repeal the next invasion.

Sorry, got carried away there for a moment. Caeserea also boasts a fine Roman aqueduct which looked beautiful in the rays of the setting sun.

Then we headed east to Galilee….or rather we didn’t. We wanted to get on the 65 road, but somehow missed it, heading further north before turning east. Night fell and road signs and the map became more difficult to read. We pressed on, passing through the centre of Nazareth…..not the loveliest of towns, and eventually into Tiberius. Once we had found the lake shore, it was a lot easier, but we still managed to miss Kinneret, the small village in which we are staying. The owner phoned us and gave us helpful directions and we arrived about 7.00 p.m.. I was utterly exhausted, so we visited the local shop and made our own meal in our rather pleasant cabin. Now, all I need is some kip to restore my equilibrium.

I think we might leave Nazareth for a day or so, but I suppose we will have to go there. There is plenty to see around Galilee.