…….and what did we see? Well Jordan of course, since it is the other side of the river! We rise late, had a very good, leisurely breakfast and then Christine and I set off south down the Jordan valley, while Dani and Mike opted to chill out in the local area.

Our first stop was a crusader castle – Belvoir, perched high above the Jordan Valley. It is spectacular! The valley is very fertile. A lot of the greenhouses are growing bananas. There are also large numbers of fish farms. 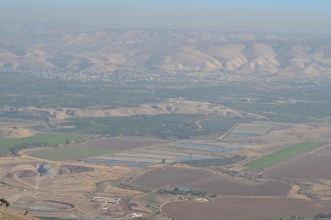 The views take your breath away, but the castle is also well preserved and the Israel Nature and Parks Authority have done their usual superb job in terms of a clear leaflet and information boards around the site. In 1168 the Hospitaller Knights bought the site from a French noble family named Velos and built a fortress there and occupied it over the next 21 years. Eventually it was besieged by Saladin for a Year and a half before the Knights eventually surrended. 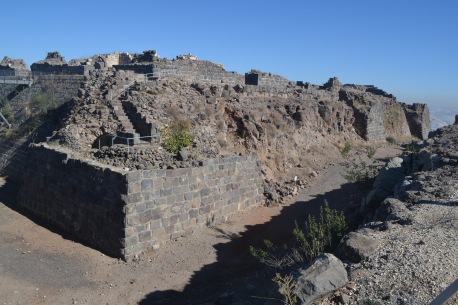 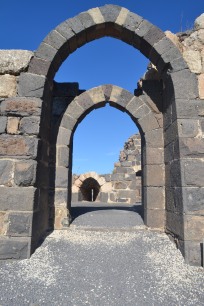 A very impressive ruin is left with an inner and outer fortress and a deep moat on three sides. What was nice from our point of view was that there was hardly any one there and so we could wander around in peace and quiet. Only towards the very end did three coaches arrive and disgorge a large number of Israeli visitors. We fled, having enjoyed our visit immensely.

Our journey up and down the mountain was interesting as they were doing a lot of work on the road and so large lorries thundered past us or came hurtling down behind us. Bulldozers and levellers meandered across the single track road and in places the road was vertiginous.

Back on the road south we came to Beth Shean or Bet She’an National Park, one of the most amazing Roman / Byzantine sites we have ever seen. It is situated below a tel which boasts some 20 settlement strata, starting in the 5th millennium B.C. and continuing with an Egyptian settlement in the late Canaanite period (16th -12th centuries BC). The city was taken by King David and then became an administrative centre of the region under Solomon. Under the Romans it became on the cities of the Decapolis and the most important city in northern Israel. Under Roman rule the city expanded and prospered with magnificent public buildings going up including a 7,000 seater amphitheatre. Under the Byzantines it became largely Christian and had a population of between 30,000 and 40,000. It all came to an end when an earthquake in 749 A.D. devastated the city. It became little more than a village and was forgotten Now it is being excavated and what they are finding is truly amazing. 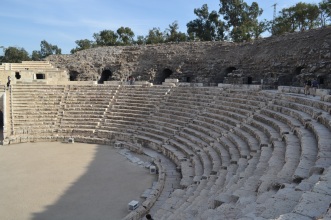 Again we had the place almost to ourselves, which was wonderful. I stood on the stage of the amphitheatre and tested the acoustics, then wandered around one of the bath houses. 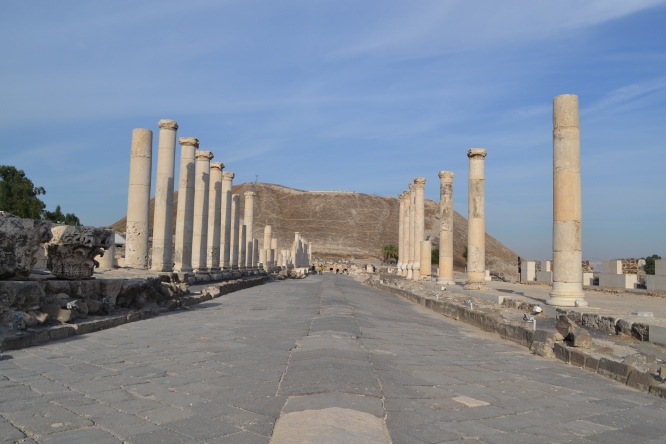 We walked down the colonnaded main street, then climbed the tel for a spectacular view of the Jordan valley and the whole archaeological site. As we arrived back at the main entrance a group of Japenese or Chinese arrived, but by then we were on our way! They had missed their chance of standing in front of what we were trying to photograph!

On our way home we made a small deviation into a kibbutz, looking for the site on the Joradan where Jesus may have been baptised. We eventually found it some distance away. We would have guessed where it was by the 10 – 20 coaches parked in the area. The prospect of 200 of more Americans singing ‘As I came down to the river to pray’ proved too much and we went the wrong way around the car park, narrowly missing a coach, turned into another kibbutz by mistake and drive through  the middle of it hoping to find a way out, which we eventually did.

Tonight we will go to the first ever kibbutz ( Dganya Alef) for a meal in their restaurant. No plans as yet for tomorrow, but I suppose we should hit the pilgrim trail again. Perhaps a trip around the Sea of Galilee before it rains on Wednesday?