Today, in the Punakha Valley it has been hot – 22C plus – and humid which has made walking rather a sweaty business, but well worthwhile. This is another beautiful valley but in a different way to others. It is highly cultivated and quite densely populated, so it is the numerous terraces and houses that make it attractive.

We woke quite early and looked out on the blackened hillside opposite. Dark streaks run up between still surviving trees and there was still evidence of fires burning near the top.

After a good breakfast we set off for the top end of the valley to climb to the Khamsum Yuelley Namgyal Chorten perched high on a hill on the other side of the river. We crossed on a fairly solid ‘rope’ bridge made of steel and then climbed steadily through fertile terraces past beans, wheat, rice and chillies. The terraces were watered by leafs coming off the stream we were following. The watering system was very cleverly constructed so that every terrace had access to water.

We left the terraces and started to climb steeply along a well worn path through pine woods. The smell was wonderful, but it was getting very warm. On we plodded and eventually came in sight of the chorten. It is fairly new having been completed in 1999. It is 30 metres high and there are stunning views over the valley from the top of txit. It was certainly well worth the climb.

We returned to the car and drove to the Punakha Dzong which is located on a peninsula between two rivers that meet at its southern tip. It’s construction began in 1637 and was completed the following year when it was christened (?!) the ‘Palace of Great Happiness’. It served as the capital and seat of government until the mid 1950s. All of Bhutan’s kings have been crowned there. 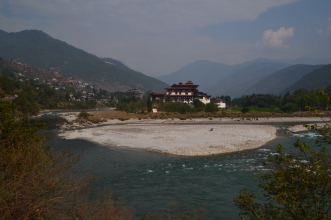 Of particular fascination were the bees’ nests which hang down at the front entrance to the dzong. They really are quite remarkable. Unusually there are 3 courtyards. The first is quite large with a Bodhi tree at one end next to a stupa. The second is small and it was here that I missed my step and fell into an Australian woman. She was remarkably understanding considering I must have bruised her! Moral if you want to avoid colliding with Aussies don’t try to take pictures and move forward at the same time.

The third courtyard was bigger and housed the temple. At the southern end is 5he ‘hundred pillar assembly hall’ which is quite spectacular but only has 54 pillars – but hey, who’s counting! On the walls were paintings of the life of Buddha which Sunam went through with us. There are massive gold statues of the Buddha, Guru Rinpoche who foretold 5he building of the dzong and the Zhabdrung who actually built the dzong.

We were pretty exhausted by now and glad to return to the ca4 for the drive into Khuruthang, a rather unappealing little town. We joined other tourists in a smart restaurant and had a good meal and a well earned break.

From there we were taken to a nunnery – an adolescent fantasy, which has arrived rather too late in life! It was in a beautiful location with tremendous views down the main valley and one of its tributaries. The nunnery was built by the father-in-law of the fourth king (he married 4 sisters and died young) who now lives in a very smart bungalow opposite it. It seemed an idyllic setting for the young nuns who were busy at prayers and making clay statues in the pleasant grounds.

We drove back down the winding road for our last visit of the day – the fertility temple. Sunam promised a fairly easy walk, but as we climbed past gift shops selling all sorts of phalluses it was turning into quite a stiff one! Again we walked through terraces and past a couple of bulls that showed little interest in us, but bellowed alarmingly at each other. The path up to the temple gate was lined with mimosa, oleander and caster oil plants. In the front of the temple was a large Bodhi tree. Inside the small courtyard two wizened people sat turning the enormous prayer wheels and clicking their rosaries.

The temple was established by Lama Drukpa Kunley, aka ‘the divine madman’ who lived between 1455 – 1529. He was born in Tibet and sought enlightenment through wine, women and song. He taught profound truths through humour and outrageous behaviour, breaking many of the Buddhist conventions of the time. His sexual exploits were legendary and this is why phalluses adorn many buildings. They are there to protect fertility in the house, but also to symbolise ‘the discomfort that society feels when confronted with the truth’. He sounds like my sort of guy!

Inside the temple there was a ceremony taking place with cymbals, chant8ng and horn blowing. The horns are shaped like – well you can guess – complete with two gonad shaped pieces at the end. Let your imagination roam. The temple is in a beautiful spot and a cooling breeze blew down the valley reducing the humidity.

Nevertheless we were glad to return back through the fields to the car. We stopped briefly at the local market and inspected the vegetables, some of which we couldn’t identify without Sunam and Mr Numgay’s help. Back at the hotel, other guests have arrived, from India, by the look of them. This should make dinner a more lively occasion at least. Christine is now going for a massage and I am going to try a bath. It has been a very good, but tiring day. Tomorrow we return to Paro. How time flies!