A leisurely start with breakfast at 8.00. The restaurant was about half full as a number of Indian groups of 3 or 4 had arrived the day before. The left while we were eating and the waitress came over and asked if we would like to try some pickle with Aloh something, which looked like a roti of some sort. I said yes, and put some pickle on a roti and bit into it. The next thing, my eyes were watering and according to Christine my face had turned a redder shade of scarlet. ‘Hot’ is an inadequate description of that pickle. My equilibrium was restored by some juice followed by coffee.

We drove out of Punakha and along the road to Thimphu stopping again at the crowded restaurant next to the Queen Mother’s 108 stupas where we stopped last time. Neither the view nor the coffee were any better.

We descended to the outskirts of Thimphu and then turned onto the road to Paro. We dropped into the valley of the Paro chu and then stopped off at the Tamchhog Lhakhang. This is an iron footbridge originally made by Thangtong Gyalpon who came to Bhutan in search of iron ore in 1433. He was a true renaissance man as he was not only a smelter, an engineer and a Tibetan saint, but he also wrote folk songs, many of which are still sung today. 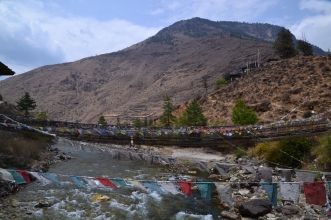 The bridge is awaiting repair, but there is a modern one nearby from which one can view it. Obviously it has been much repaired, but some of the original metal links remain in place and it is a remarkable construction.

We reached Paro in time to visit a bank and then go to our least favourite restaurant for lunch. It really is remarkably lacking in atmosphere, as we noted when we visited on our arrival in Bhutan. Still the food wasn’t awful and we didn’t linger.

Mr Numgay went to fetch the car for us, forgetting He had given Sunam the keys. There then followed a French farce as we went one way to the car and he returned to the restaurant another way. A mobile phone call ended it rather abruptly, otherwise it could have gone on for some time!

We drove up to the watchtower above the Paro dzong. Unfort7nately it was damaged by an earthquake in 2011 and is still to open. However the National Museum, which used to be in it, is now in a building behind it. It is well laid out with a room devoted to masks and dance, a room given over to ancient thankas (wall hangings) and a room about Bhutan’s remarkable biodiversity. The latter made us want to come back to sample the wildlife we didn’t see!

The views from the watchtower were magnificent. There is no path down to the dzong, so we had to drive down to it. It was strange entering it again without the crowds at the festival the week before. It is a beautiful set of buildings and we were able to appreciate the two courtyards and the temple without a lot of people. We walked back down, over the bridge to the car and then Mr Numgay took us to our hotel.

This is rather grand, standing up in the hills above the town. It was built in 1974 for guests invited to the coronation of the 4th king. There is a delightful courtyard and pine trees all around. The views aren’t stunning – our room overlooks a poly tunnel – but we have a living room, bedroom and bathroom, all very well appointed. We need a good night’s sleep. Tomorrow we make an assault on the Tiger’s Nest, a 5 hour round trip!