A rather wet and foggy start to our last day of pure sight-seeing in India. The minor irritants of this ‘luxury’ hotel did not get the day off to a good start. The shower was luke warm and we discovered the same was true for everyone else in the group. Furthermore our breakfast coffee was Nestle instant. No fresh coffee was available. While we would quite understand if this establishment was at the lower end of the market we are paying a great deal to stay here and so little things like these are quite annoying.
Anyway, we said goodbye to Karen and Tom, who are returning early for a wedding, and then got into 3 cars and headed for Tiger Hill in the rather optimistic hope of seeing Mt Everest or at least some of the lesser peaks of the Himalayas. Instead we visited a building site with a good view of Darjeeling. It appears they are building a viewing platform for those who come to see the sunrise, which apparently is not as good as it once was due to climate change. Optimism runs deep in India. 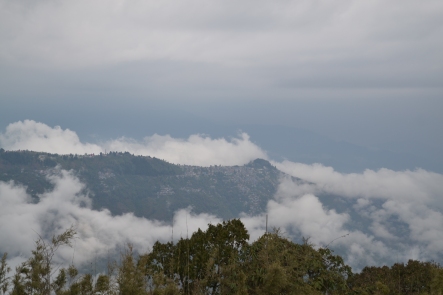 We came back down the hill, squeezing between parked cars in the last few yards with barely a Rizla between us. We crawled in heavy traffic along the route we had done yesterday in the train. We crossed the town and went up another hill road to the Centre for Tibetan Refugees. This is a pretty grim place, made worse by the rain. The toilets must be the worst we have encountered on any of our trips to India. We visited the shop, but saw nothing that Christine and I wanted to buy and I went around the photographic exhibition which was quite interesting. It was very cold and so wet, and a little miserable, we returned to town. We walked onto the Mall and visited the bookshop again. Christine and I went into a shop that sold tea and artisan goods from small producers and bought first flush tea at a fraction of the price that we could have at yesterday’s tourist shop. We also went into the oldest shop in town which is like an Aladdin’s cave, fully of jewellery and artefacts.

Once more we went to Glenary’s for lunch and some real coffee. It really is very good value for money. 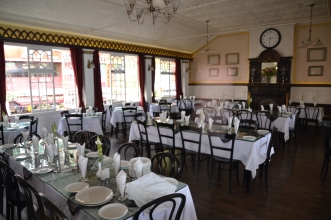 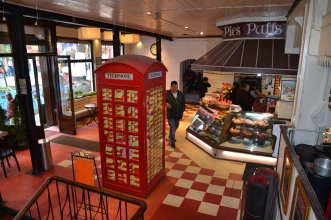 Now our party split, some going back to the hotel and us two and David going to the Botanical Gardens. Rather ominously this involved a great deal of walking down hill, which would a great deal of up hill later! The gardens are in a pretty grim part of town and are approached along a street lined with washing hanging up to dry. However the gardens were well worth a visit with some stunning orchids and a beautiful hot house. The whole place had been allowed to deteriorate over the years (it was established in 1878) and had become the haunt of courting couples and those who were keen on that rather common species ‘Inflagrante delicto var. al fresco’. Now there are guards on the gates and you have to pay admission, so if it is still a outdoor bordello, at least it pays its way!

We set off back up the hill, taking it very steady, but David was clearly finding it a bit much. When we got to the informal bus station, he asked if we could take a taxi the rest of the way. Our guide immediately set to work to find us one, but the whole area was in utter chaos as it was the end of school and it was heaving. How we didn’t get flattened by a bus or taxi I don’t know, but somehow we survived. Our guide found us a taxi which was willing to take us up to the hotel for 250 rupees (about £3.00). Whether it was capable of getting us there looked unlikely as it was in a considerable state of disrepair. Still it was nothing if not game and its little engine laboured bravely under the strain of three large Europeans. We gave our driver 300 rupees in the hope that the extra 50 rupees might be spent on maintenance.

Tomorrow the long descent to the plains which promises to be a nerve shredding and bowel opening experience – I apologise for the coarseness, but I promise you I do not exaggerate. Forget coffee fir breakfast, we’ll break out the Imodium. Tomorrow night in the big city – where? Oh, Calcutta!