A school day today. We rose early as we had been invited by the students to witness their early morning singing and dancing. This was ‘free-form’ and very exciting with students jumping about, crawling on the floor , banging a drum and blowing whistles. I kept hearing the word ‘Jesus’ so I’m sure it was Christian, but it reminded one of rather more pagan rituals. As I murmured to Christine, “How unlike the homelife of our own dear Queen” – well as far as we know. After watching the students do a serious workout we felt hungry so returned for breakfast.

We’d had no internet the night before and so I couldn’t post the blog. This morning it decided to work so I quickly uploaded pictures and posted the blog. Obadiah arrived about 8.40, 20 minutes early, with Imami ready to take us to Ndomba Secondary School where he is a governor. We managed to get ourselves ready buy 9.10 and set off. We passed through Ngara and then turned off to the left, climbing and then plunging down into a small valley filled with rice fields; the first time I’d seen rice growing in Kagera, so naturally I asked if we could stop and take pictures. Then we climbed back up before zig-zagging down into a much larger valley with a large red-brown river flowing through it. Brickworks lined the valley floor. We crossed by a bridge which had tarmac on it and for about 50 yards either side of it – rather strange. We climbed back up again and then past where Obadiah had lived as a boy and where his parents still live. The school was a couple of kilometres further on. Later Obediah showed us where he had gone to primary school – an 11km walk there and 11km walk home. He would set off at 6.00 a.m. each morning! Furthermore when the family needed water they would have to walk between 2 – 3 kms down to the river and then carry back up hill with it on their heads. No wander Obadiah is short! 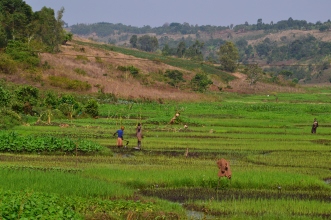 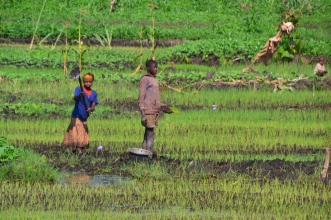 We were greeted at the school by the headmaster and introduced to the staff. There are 450 pupils aged 14 – 18 and 16 staff although only 11 are full time, the rest being brought in when needed. Some classes had 70 pupils in them, making it an impossible task for a teacher to get round to each pupil because there wasn’t room to move. The upper classes were smaller and smaller groups were needed for science. New laboratories were just being finished as the government is trying to encourage more pupils to do science at school and university. We filed out to the sort of parade ground in the front of the school and a boy drilled them until they were standing properly in rows on three sides of a square. We were introduced and of course invited to speak to them. Then it was group photo time. The staff seemed as excited as the kids and we had to pose for numerous shots with staff members. 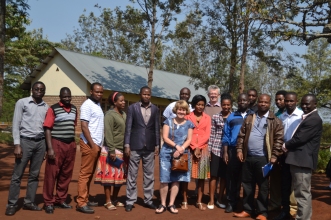 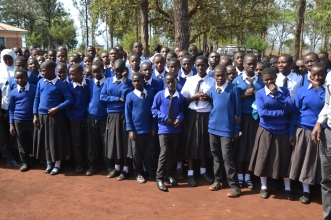 Then we taken on a tour of the school. It used to be a UNHCR registration centre for refugees from Rwanda. The buildings were converted to school use in 2007. Some of the buildings have been converted into dormitories as parents prefer their children to board. Others are now teachers’ houses as the school is quite remote and teachers would not be able to travel to the school each day. That explained the toddlers running around the site. The dormitories are fairly spartan, but the dining hall looked as though the 3 minute warning had been given and everyone had left instantly. Benches and tables lay scattered about higgledy-piggledy. The school kitchen consisted of 3 3stone cookers with enormous pots on them, one contained rice, another beans and the third contained ugali (a rather revolting looking porridge. As we approached the classrooms, pupils came flooding out for break. The day starts at 7.00 a.m. and continues to 3.00 with a 20 minute break. Lunch is only served to the boarders. The school hopes that we can find a school in Suffolk to twin with it. Let us hope we can find somewhere that would be interested.

We left about 11.30 and headed back through the beautiful countryside. I kept asking to stop to take pictures and Imami was his usual patient self. We took a short cut back to the main road. It was little more than a track which climbed and then dropped into valley bottoms. This had been Obediah’s route to primary school and is now his way home on Friday evenings when he returns to his family from KCTC on his motorbike. Rather him than me!

On the main road we passed 4 teachers from Murgwanza primary school who had been on a training day of some sort, so they piled in the back. However before we entered Ngara proper, Imami pulled over and Obediah and the teachers got out and we were taken straight to NAPS. I assume they walked the rest of the way as Imami’s son was graduating from the kindergarten and he stayed for the ceremony. Walking long distances, it seems, is not a problem in Kagera!

As we got out of the land cruiser we saw a large tent like construction on the rocky slope that is in the centre of the school. A voice was bellowing over the loud (very) speaker system. We advanced and were met half way by a teacher who welcomed us and ushered us through the assembled parents and students to a place of honour next to Asifiwe and the Bishop. We apologised for being late, but were assured that we weren’t as it had only just begun. This slightly puzzled us as it was due to start at 9.00. However judging by the programme of events that Asifiwe had it seemed to be the case. There were many hours of entertainment and speeches stretching ahead of us! 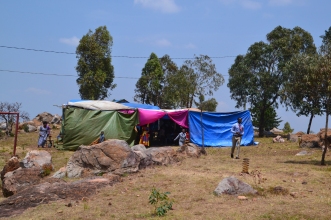 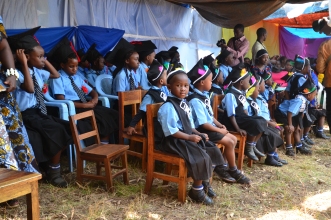 Of course we were made very welcome and the children were delightful and very well rehearsed. The singing and dancing were excellent and there were sketches and even a science experiment demonstration. Around about 3.00 p.m. the students received their leaving certificates and a range of others for excellence. I would like to say that the whole thing was like a well-oiled machine, but in truth it was more like a well-oiled drunk, lurching from side to side as students had little idea as to whose hand to shake and how to pose for the photographs. This part had clearly not been rehearsed, but it was delightful and the pride and joy of the parents was wonderful to see. They had hung garlands and hearts with messages on around their offsprings’ necks and even some sort of perspex boards, so that the poor children could barely stand up straight!

Then it was time to ‘cut the cakee’, which involved a cake and Bishop Darlington and a student wielding a knife. The initial incision having been made, the cake was then butchered with gusto by one of the parents and its dismembered parts stuck onto cocktail sticks which were thrust into the mouths of unsuspecting guests by the student. 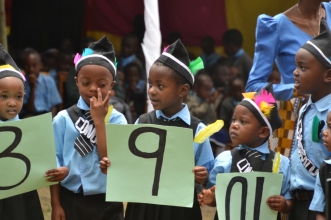 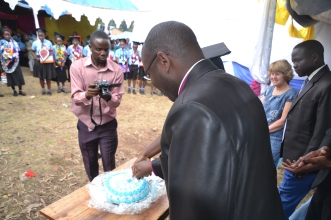 We were rather hoping that as it was approaching 4.00 p.m. this might be the finale, but of course not. So far there had been no speeches and that could not go unremedied. First up were the graduating students. Each speech giver issued a document to the guests so that they could follow the speech and note the progress that was being made. The students’ document ran to five pages which was long enough, but, we then discovered it was to be delivered in Swahili and then in English. The sun moved across the heavens, I am sure, but time in the tent seemed to stand still. Eventually the two students (well actually three as one was acting as a microphone stand) came to an end, having thanked everyone even remotely involved in their education and made a plea to the Bishop for more facilities. Then came the deputy head, who was remarkably brief coming in at about 15 minutes. Then Asifiwe stood up and after a few words of his own introduced us. We managed the sort of potted version of a guest speaker’s speech at Prize Giving, stressing the importance of hard work and determination if the students were to achieve the glittering prizes that undoubtedly awaited them in the sunlit uplands of academia. There was modest applause, but the fact that combined we came in at well under 10 minutes, we were probably a slight disappointment. Then the main act, Bishop Darlington. Asifiwe translated for us and it was a fine speech in deed and almost taciturn as it barely made 25 minutes.

With a sigh of relief and the thought of something more than a crumb or two of cake in the offing we got to our feet. Too soon. The parents’ representative had to have his say and then a woman whose exact position failed to ascertain. Another 25 minutes passed and then the guests of honour arose as one and headed for the food that was on offer in one of the classrooms. Yet again we are a disappointment, for, ravenous as we were, we simply cannot eat the vast amounts of rice and beans that our hosts think we should do. Still we sat with Bishop Darlington and Asifiwe so we had a very pleasant chat. Thomas was waiting for us outside and bundled us in the car to bring us back to Murgwanza before returning to pick up Christela and Joan. Joan had graduated from kindergarten that day and so I should imagine was shattered – six hours in a hot tent with a sound system designed to break the will of the Burundi government and people, must be exhausting for any child of six – surely?

We arrived home worn out, but in need of a leg stretch, so we wandered down to the cathedral and met Philipio and Nyamwenda who wanted to chat. Then we got back and started to prepare dinner but Absalom arrived and wanted a chat, which is always a pleasure, but delayed our meal. Just as we were setting the table Nyamlinda arrived with my flash drive and some incomprehensible reason why he couldn’t give it back to me. I was too tired to argue and told him in no uncertain terms that he would have to give it to Dorothee.

Scrabble as usual and then our much needed bed. Tomorrow should be less exhausting, but who can tell?