A gentle start to the day, but the market beckoned. Then Absalom arrived just as we were brewing coffee. I swear he can smell it from his house! Anyway it is always good to see him and have a chat. We eventually left for the market at about 10.30, but we had barely started our walk before Thomas pulled up in his car and offered us a lift. We went via an MP’s house as he had some business to conduct and then he took us to an entrance to the market we had not been to before – the butchery entrance! Wandering amongst carcases of pigs, cattle and goats is a great way for vegetarians to start the day! We made a beeline for the kitenge and browsed the various options. Eventually Christine settled on a lovely design, but a rather expensive one at about £9 for a triple piece! We wavered but after mature consideration we thought it was worth the outrageous price! 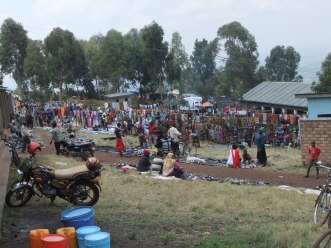 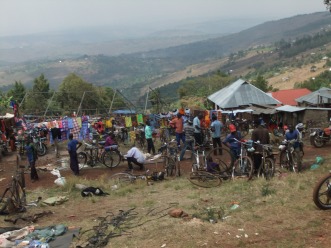 We walked back from the market, stopping at the petrol station for a bar of Cadbury’s dairy milk – you can see how desperate we were for chocolate! Then we realised that we had a shadow; a rather dirty and bedraggled child was walking a little behind us and had been since the market. He didn’t seem to want anything other than the pleasure of our company – a discerning young man clearly. However as we dropped into the valley he seemed to meet some people he knew and we realised that he was fickle. We stopped at a stall and bought some passion tunda and then cut down to the river and up the other side. We had gone into town via Christine’s dressmaker, but he was closed, so we returned the same way, but he was still closed.

We began a little desultory packing, but at 4.30 we had been invited to the Ruzabila’s for afternoon tea and to collect the bags we are bringing back for Rose. The house was in chaos as they are also packing to leave their house on Monday to go to Nyamiaga. Still they cleared a space and we enjoyed a black tea. Then Rose came in a with a very large bag stuffed with other bags and asked if we could take it. I said we would be happy to take the bags Valerie had ordered and paid for, but doubted if we could manage any more. Something must have got lost in translation, because before we knew it she had materialised with another to enormous bags stuffed full. I then had to explain patiently, but with a hint of steel in my voice, that we would be lucky if we could manage the first bag let alone any others. The message got through, but Rose insisted on accompanying us home with two of her students carrying the bag, to ensure, I think, we were telling the truth!

At 6.00 Thomas arrived and we went to Bishop Aaron and Kaveena’s new house half way up the other side of the valley. It is very pleasant with a beautiful view of the valley. We were made very welcome and drank soda and ate peanuts while we chatted. Their great grand-daughter, Princess was also there and seemed fascinated by us for a while. Thomas went off to do something else and seemed to be gone a long while. The sun set spectacularly behind Bishop Aaron’s tonsured head, but no sign of Thomas. We were meant to be at Fareth’s at 7.00. Eventually he bounced in, but then proceeded to sit and eat peanuts. Finally we left just after 7.00 and sped up the valley side to the dressmaker’s. It looked shut, but Thomas asked a youth standing, doing nothing much, as youths do, and suddenly there was a lot of calling and whistling and a breathless dressmaker arrived. He was on his way to us with the dress! I have to say it is a very good fit and Christine looks wonderful in it.

We arrived at Fareth and Tabitha’s at 7.20, full of apologies, but they were very relaxed about it. Wilbard was there and we had a very pleasant meal and chat. Wilbard kindly gave us a gift of a kitenge and other gifts for us to bring back for people. We left about 9.00 and were by now looking forward to bed. I decided just to download some pictures before adjourning and was midway through when Christine who was standing the other side of the table screamed and fled. She had seen a mouse! We left the building, faster than Elvis with his blue suede shoes on fire! I had always thought Christine was the brave one when it came to rodents, but I fear she has feet of clay! So we were now banished from our house and bed by a small furry thing WITH A TAIL!! I went to Fareth and asked if he could come and clear the area. Seizing only his walking stick he came in and poked and banged in every room except the front large bedroom which we don’t use. He was brilliant, even getting down on his poor knees to check for wildlife. He found none, but where had it gone? We thanked him and let him go, still nervous at the prospect of sleeping with a mouse in the house. We stripped our bed and I searched the room high and low. I then barricaded the bottom of the 2 bedroom doors and the kitchen door with copies of the English – Swahili dictionary and some pencil cases to fill the gap. I must have a word with the publishers and point out that a if they resized the dictionaries by an inch each they would fit perfectly across the bottom of a door-frame. This might increase sales.

We went to bed fearing we would be unable to get to sleep. However the mosquito tent gives one a sense of security and while it would not withstand a machete wielding rodent, it is reasonable safe. In fact we had quite a good night’s sleep as it turned out and when I did wake for the usual reasons I heard nerry a squeak nor a scrabble.

We had to get up early as Absalom was picking us up at 8.15 to take us to K9 – an unusual name for a village , unless it is particularly popular with dogs, dentists, or Doctor Who fans. The name may derive from the number given to the refugee camp that was there, or may relate to a road building base as it is on the main road to Rusumo. Either way it is quite small and indistinct. The church itself is wattle and daub with an earth floor and a stunning view over a valley and the surrounding hills. 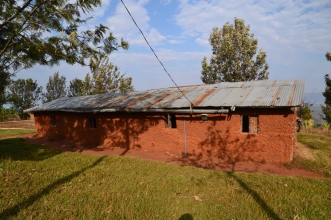 We were welcomed by the evangelist and then waited for the pastor to arrive as well as most of the congregation. It was obviously a 9.30 service. Beatrice, Absalom’s cousin had come with us. We were shown to the guest seats up on the earth platform next to the altar. It was a lively and joyful service. The Evangelist seemed to have a permanent smile and broke into laughter readily. At one point he asked why his congregation wasn’t smiling more as they had guests. Absalom spoke very well and kept it short (about 25 minutes). Of course we had to speak as well. We felt very welcome. The choir performed three songs although their soloist was about a semi-tone flat for one of them. However their group singing was spot on and their dancing was brilliant. After the service, Christine produced her bubbles and the teenagers(!) thoroughly enjoyed chasing the bubbles. I somehow think this wouldn’t happen in the U.K.!

We had been invited for a soda at the church leader’s house, but of course it wasn’t just a soda. They laid on a full luncheon with rice, matoke and cabbage. It was very good and was washed down with soda and finished off with a perfectly ripe piece of avocado. Delicious. The generosity of those who have little always seems to outweigh that of us who have plenty. We were waved off and headed towards Ngara, with the pastor’s wife with us. We dropped her near her house and she insisted we wait while she ran inside and returned with gifts for us. Two Womencraft items were handed in through the car window – again such generosity.

Back home we set about packing, taking our suitcases outside and emptying them to make sure there were no little visitors. So far so good on that front, but let us not count our mice……..etc. Of course we have had stream of visitors including Wilbard with another gift for someone, then Joctan who gracefully posed on the porch wall while I took his picture, charming but as camp as a girl guide jamboree! Then John R turned up to see what we had managed to pack. We explained that we weren’t ready yet and that we would bring back anything we couldn’t get in by 7.00 p.m.. Then he tried to put the bite on us, by telling us his daughter who is at boarding school had texted to say she was out of money and he hadn’t any to send her. We expressed our sorrow and hoped that something would turn up but he left empty handed. Since we had delivered a £100 for bags in the last month, we wondered where the money had gone!

We have almost finished packing and have got some of Rose’s bags in, but I dare say it won’t be enough! Tonight we go to Thomas and Christela’s for a farewell dinner and to make my beautiful god-daughter cry, as that seems to be my role! The Mother’s Union has a baptism celebration on across the road. We have been invited to drop in by Innocent whose child it is, but frankly we don’t have the time and anyway the speaker system is at such a volume that we feel fully included. This is one aspect of life in Tanzania I will not miss. The steady thump of the base beat is enough to drive you crazy if you let it. Still at least the natives aren’t restless, they are just having a good time. As indeed we have, a very good time. We shall miss this place and the people, but I shall not be sorry to come home and enjoy a few things we take for granted, but are just not available here. My blog ends here. I hope you have enjoyed reading it as much I’ve enjoyed writing it. See you soon!