We rose early. Not easy as we were tired. Stephanie made porridge for herself and Christine and I hit the Weetabix. Duly fortified we were on the road by 8.30 to pick up the others by 9.00. We were actually early at the base, but Christina, the American chaplain was punctual and we entered the security system. Basically this meant handing in our passports and being given a badge toshow we were visitors. Much like getting into a primary school these days. Photography was definitely off the agenda. We don’t want the Iranians or Russians to know there is a Taco Bell on base now do we?!

We went to Christina’s office and she showed us briefly around and gave us each a ‘popsicle’. For those, like me, unsure of what one is, it is a long stick of flavoured ice, like a lollipop but with a simpler design. Mine was pina -colada flavour and was delicious. Christina then talked about her job which she is clearly very passionate about. Apart from facilitating services for a range o& different denominations and faiths, she also is a counsellor for those who are having problems. She has the rank of Lieutenant, but can get to see the top brass pretty much whenever she needs to.

The air con. was beginning to bite, so before hypothermia started to set in Christina suggested a jaunt in her golf buggy. Nothing makes you feel more  like an American president than a ride in a golf buggy! We were a little cramped at the back, but it was fun. We passed along a range of pretty muc( identical buildings, whic( Christina seemed to identif6 with ease, then over a bridge to the more recent part of the base built on reclaimed land. I’m not too sure if we were meant to be there, but let’s just say our badges came off in our hands and we swept past the checkpoint and out onto the quay side. There were a range if minesweepers in and in the distance a large destroyer. We also had a good view of the British enclavevwhich was in some sort of security lockdown – probably something to do with Brexit.

Back on the other side, Christina parked the golf cart and we strolled through the medical centre to the Nex. Nothing gives an edge to your appetite like the contemplation of disease in others. The Nex is a shopping centre and food mall. Anything that you can get in America you can get here – including chlorinated chicken. We settled for some excellent salads and coffees and then adjourned to the Officers’ Club to eat them and to talk more about life as a chaplain. We were joined by Mark, a chaplain on the much smaller (of course) British base and he and Christina submitted to our interrogations.

i have to say that I have a renewed respect for what military chaplains do as a result of the morning and particularly our chat over lunch. Mark made a plea for greater support and understanding for military chaplaincy within the Church, and I feel it probably needs it. This is not the place to go into details, but if Christians should be wherever people are, offering help and support and God’s love then they should be in with our troops, and the military is a tough place to be. I came out with a real admiration for what these people are doing.

A 14 year old boy with poor eyesight signed us out of the base. Bless him he was probably 18 but that was clearly a secret known only to his C.O. and his mother. Being close to any American holding a gun makes me uneasy, and so it was with relief that I passed out through the door into civvy street. From the base we took a taxi to the Cathedral. The meter clocked up 4 BD but somehow we were charged 7- presumably because it was a Thursday and there was an ‘r’ in the month? Or might it have been that we were clearly very stupid white Christians? Either way we paid and went up into the very pleasant flat where Susan and Norma are staying for tea, biscuits and a chill.

Chris popped in to say that his wife, Trish, had had her knee op. and was now home. Christine expressed an urge to catch the bus back to where we were staying so Chris kindly phoned the man who set up the Bahrain bus company to ask advice. I think his advice was really, “take a taxi” as it would take over 2 hours and involve 2 changes.  Christine had the bit between her teeth however, so we wrote down the bus numbers and other tips and I silently prayed.

We left our travelling companions and headed for the souk. Unfortunately it bein* only 3.00 p.m. much of it was closed. However we wandered amongst shops with beautiful fabrics and fragrant spices, before choosing one at random to buy 200 grams of mixed fruit and nuts. The real reason was to get some change for the bus, but ove4 the next three hours the mixture was to prove an invaluable source of energy. 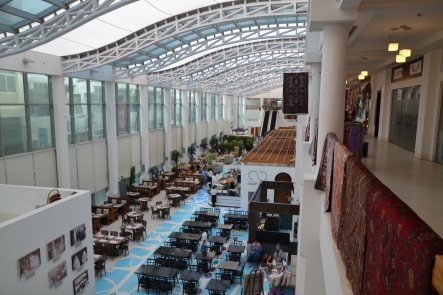 After visiting the City Centre Mall,  with its array of eateries and tourist trash shops,  so that we could use the loos, we found ourself at a bus stop. We needed a number 10    or possibly an 11. We waited….and waited. Then a number 10 pulled in and we tried to buy a ticket to Gefool. “No….number 11 is what you need”. We waited again…no sign of an 11. We tried another no. 10. “No, you need a number 11”. Over the next twenty minutes buses of every conceivable number came past but no number 11. It was beginning to feel like lottery night! 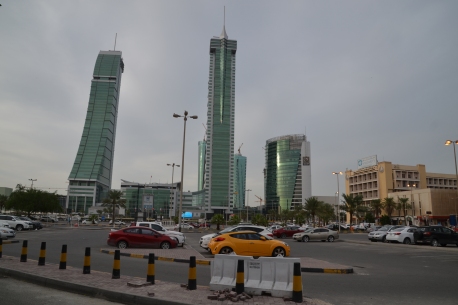 In the end, I put my foot down, “ If one does not come by half past four, we get a taxi”. At 28 minutes past a number 11 arrived and we gratefully boarded it’s air-conditioned magnificence. Three lousy stops later we were back on the street waiting for an X3. Twenty minutes later we were still there. By now my lung capacity had reached an all time low thanks to the heavy traffic and the added extra provided by the large number of buses that were not number X3 which had pulled away from our stop. Eventually our bus came in and we headed for Badaiya.

By now it was dark, so it was hard to see where we were. Luckily the driver knew and gave us the heads up when we reached our destination. It was overtaxing for him as it was where the bus terminated. Another wait, this time enlivened by the small of horse dung from some sort of mounted police  barracks behind us. There was also a police establishment in fron5 of us but that didn’t smell of anything…..not even fear.

Our bus duly arrived but our pleasant driver did not seem to understand that we wanted to be dropped by the camel farm. Shaking his head he left the bus and promptly locked himself out. Faced by a driverless bus with its engine running it was tempting to see if I could find the camels without him. However his banging on the door and rather pitiful face on the other side of the door persuaded me to find the button on the dashboard that would let him in. I opened the bakdoors first and as he made a bid to get to them closed them again. Then I opened the front door and he ran back jumping on board, before th3 game really got going. Oh, well, we set off and I was relieved when he turned onto the direction I thought we should be heading. Strangely he decided after about three stops to leave the bus again. A second lockout ensued, but this time I took pity on him and let him back in straight away, although he could have done with the exercise.

The camel farm duly materialised and we dismounted onto an area of mud and stone next to a dual carriageway packed with rush hour traffic. Somehow we made our way across and strolled into Venice Gardens a mere two and a half noirs after leaving Manama. What a sense of achievement!

Stephanie’s husband Darshon had arrived back from Saudi and was in the throes of cooking us a deliciou# Indian meal. We tucked in with gusto (not the name of their cat) and then, after helping to wash up we retired to our room. Herself is breathing heavily beside me, alas not with lust, but catarrh……still we are in the Gulf! (Think about it). Tomorrow is church, lunch and other delights. Goodnight!