This morning, it being Friday, saw the start of the weekend here in Bahrain, so of course we went to church. Holy communion at the Cathedral on a Friday seems a bit weird but it was a lovely service at which we were made very welcome. The sermon was preached by the Archdeacon of Exeter and there were a good selection of hymns. Tea and a delicious cheese stuffed bread (manakish) were served as we mingled with other members of the congregation.

Then we were taken south towards the middle of the island for lunch at the BAPCO Club (Bahrain Petroleum Company). This was a buffet of unbelievable proportions! We sat at round tables and then went off to collect mounds of delicious food. We even had a glass of very palatable dry white wine. I chatted with David, an insurance man, about life in Bahrain and then staggered back to the buffet for a range of desserts. I shall probably be charged extra for the flight home! At the end of the meal Archdeacon Christopher and his wife, Ann, spoke briefly and Susan gave a brief outline of what Christians Aware is all about.

It was a very pleasant, extended (and distended!) lunch. As we left the air show was in full swing and we stood outside the club watching a display team rather like the Red Arrows wheel across the sky and colour it with coloured smokes. We drove to the local church at Awali where there seemed to be some sort of Indian Catholic family fun day in full swing. As is the case with St Christopher’s, Christians of all denominations seem to use the building. 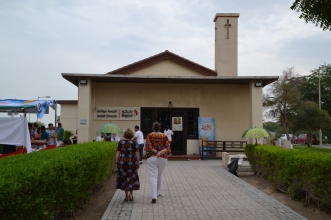 We drove through the BAPCO compound past rows of large detached bungalows which are homes to the oil and gas workers. Then we headed along the main road towards the air show. To our right was a large area of ‘desert’, open ground comprising rock and scrub where people in their hundreds had parked up to watch the show for free.

The road was heavily congested so we moved slowly along getting quite a good view ourselves. Apparently this area is used for recreation at weekends when many come out here in the cool of the evening to barbecue and share family time and enjoy the cooler night air. Many in Bahrain live in apartments with no gardens, so this is the place to get out into the relatively fresh air.

Leaving the air show behind us we headed for home, past a large area of ancient burial mounds and massive, but attractively painted, modern estates of houses. Everywhere there is building and the desert is disappearing. However the government is doing its best to preserve ancient sites. We stopped at a shopping mall close to the compound and looked around. An inclined travelator took us up into the mall where there a range of shops including cafes with outdoor seating. We went into a moderate sized supermarket which was very well stocked and had a fabulous bakery. Noticeably, the ‘pork section’ was screened off!

Back at the house we had time for a short nap before returning to Manama and the cathedral for a Tamil service. Every room in the cathedral complex was in use with sounds of worship filtering out through the doors. Ours was not very different from a standard C of E service and was conducted in a mixture of Tamil and English.  We were made very welcome and Stephen, himself from southern India, gave the sermon in both languages. 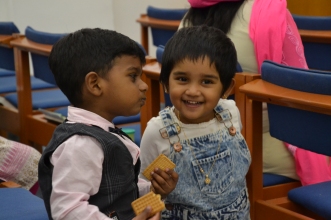 After the service we had a chance to talk with many of the congregation while eating Indian delicacies from a local bakery and drinking chai. Most of the people I spoke to had high paying jobs in banking, civil engineering, or the hospital. This was not a congregation of slave labourers! They were delighted when we spoke of our visit to southern India and how much we had enjoyed it.

Stephen drove us home and we sat and talked with Stephanie and Darshon before hitting the sack at about 10.00. No rush tomorrow as we have a ‘free’ day.